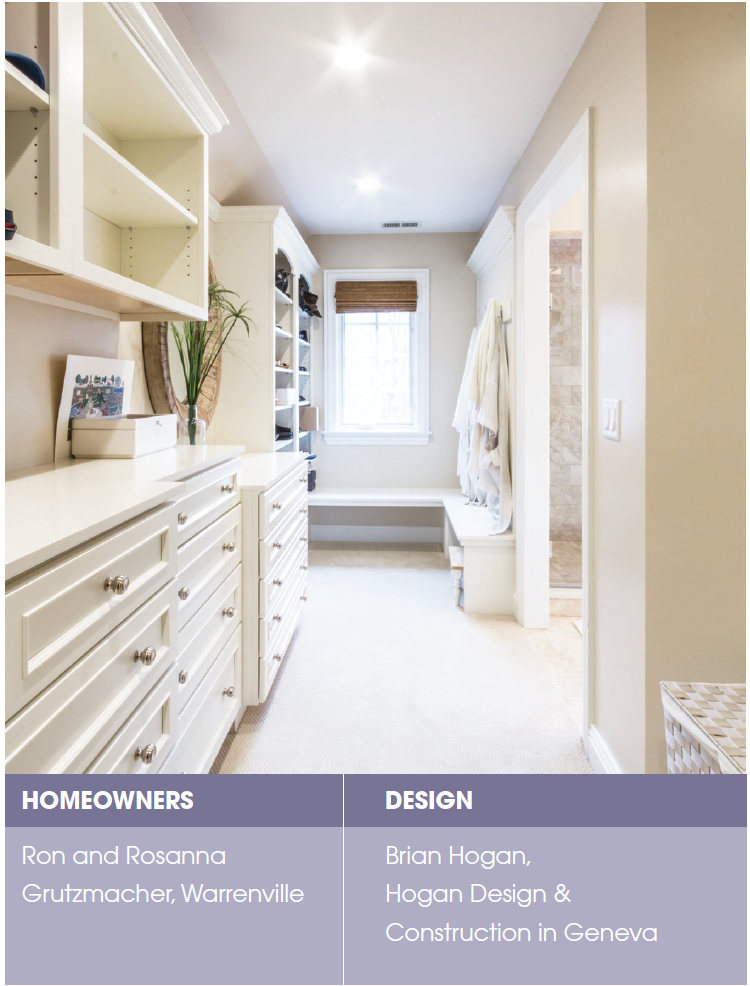 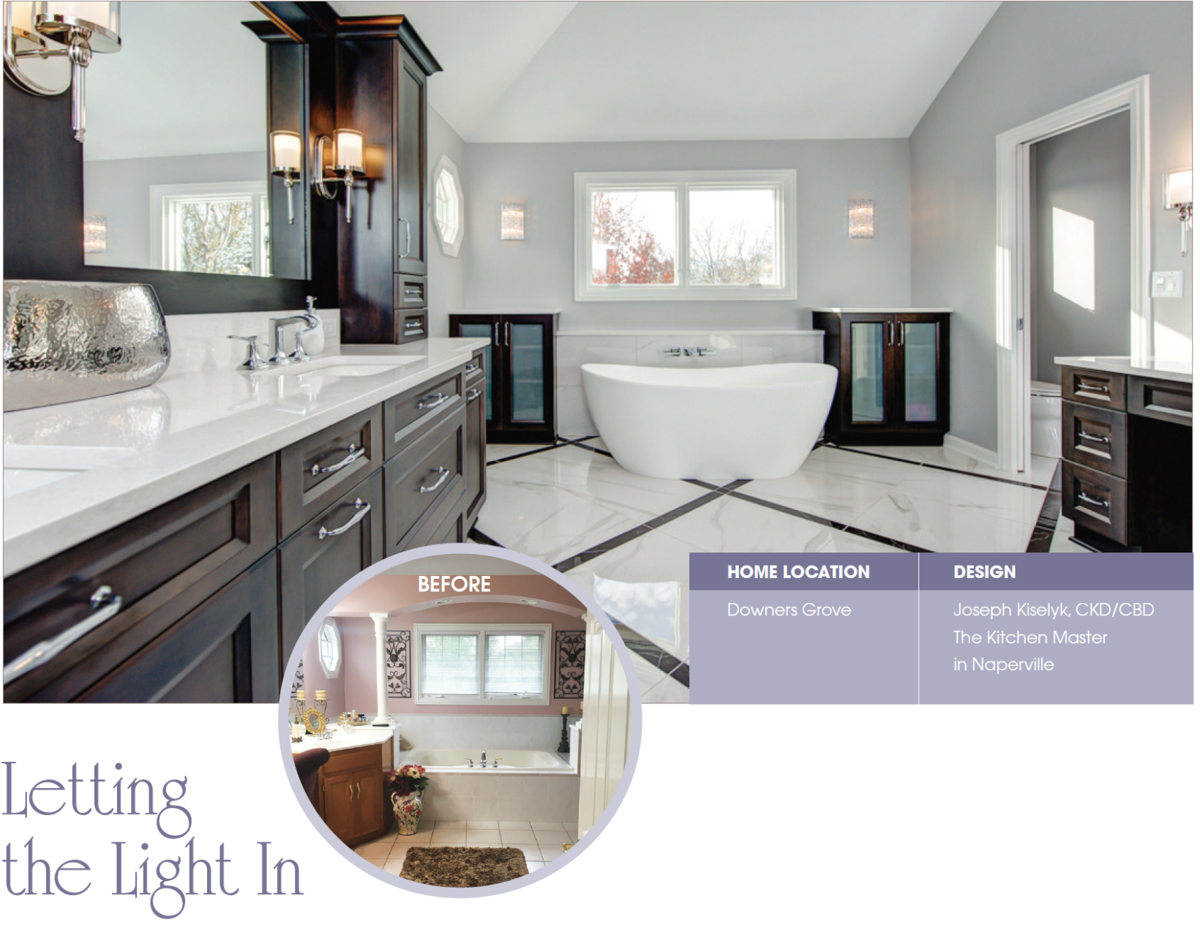 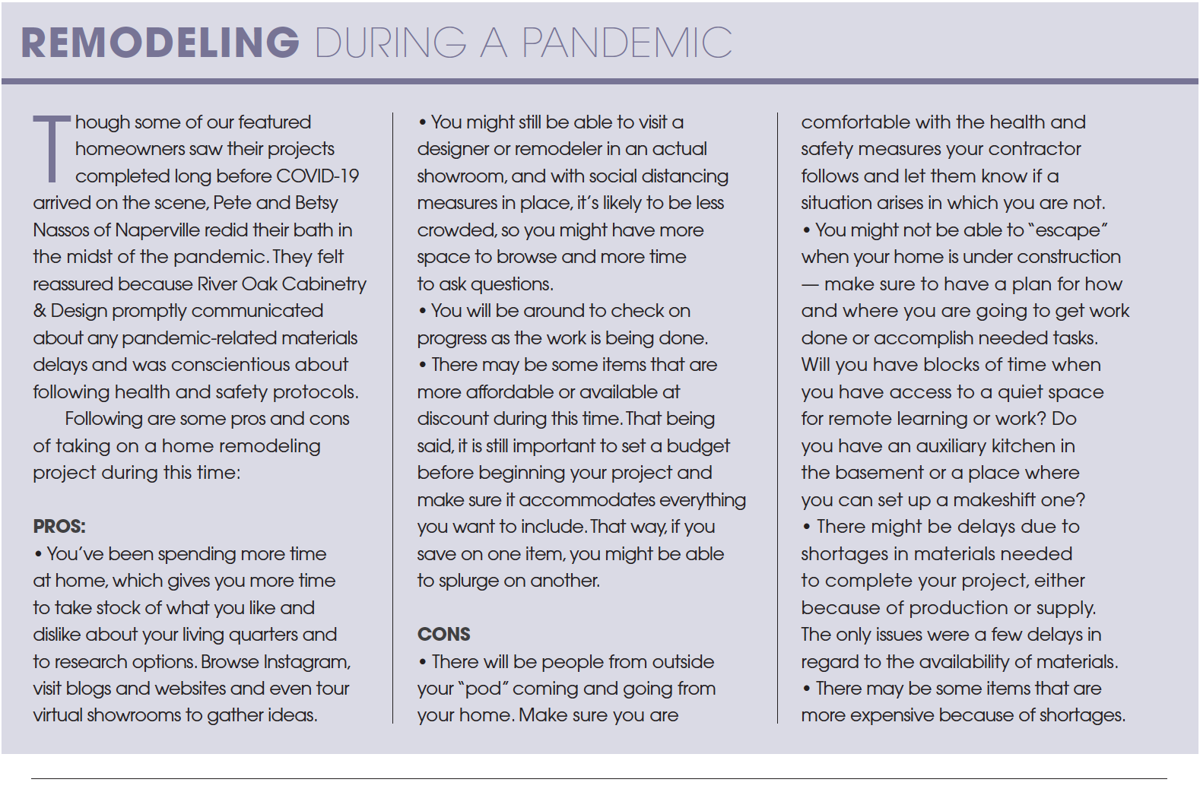 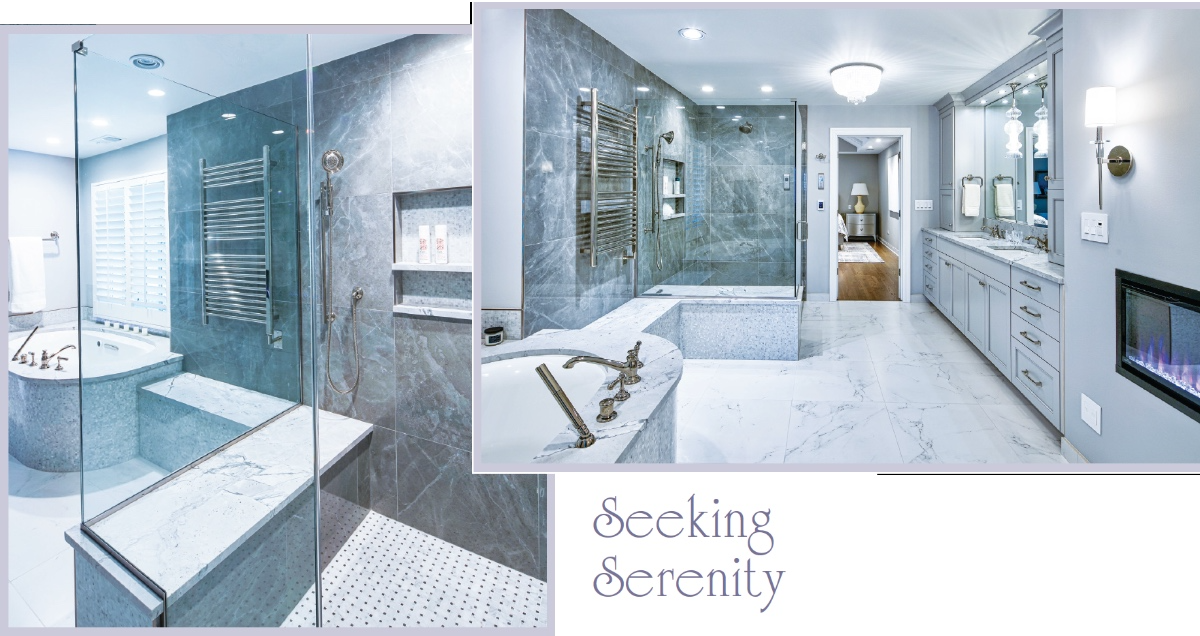 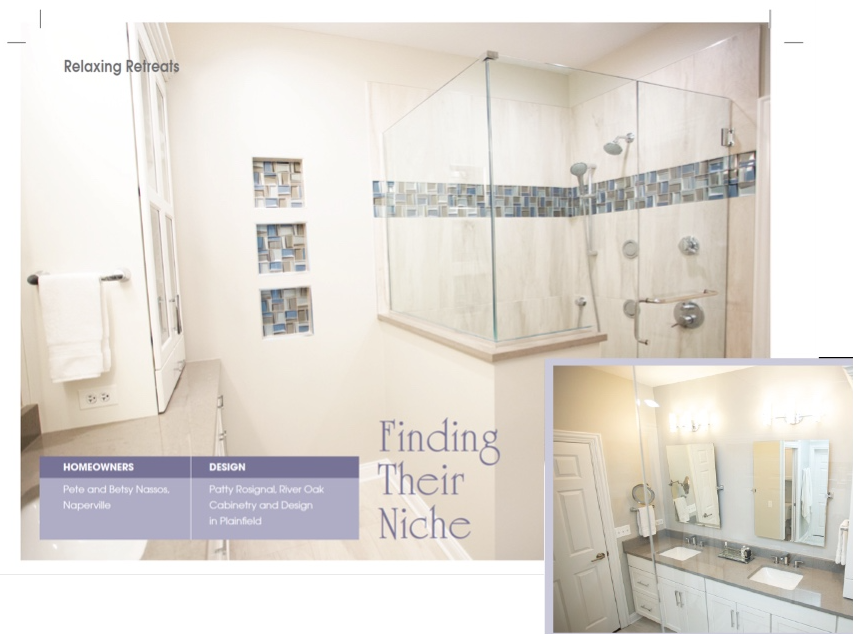 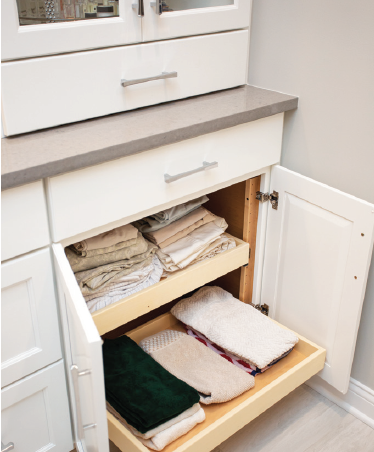 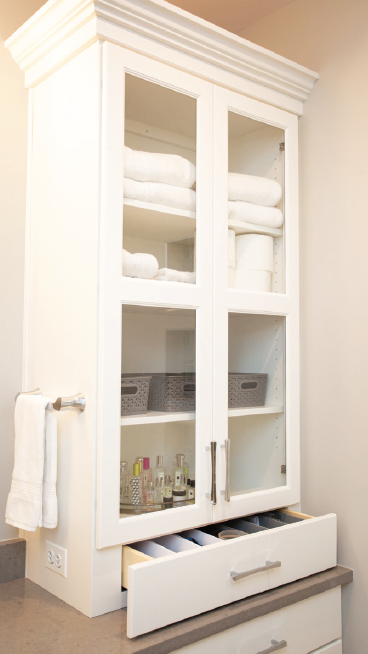 After a year spent sheltering in place, the importance of a highly functional at-home retreat is clearly evident. The master bath, a room where most of us bookend our days, can be just such a place, so it’s no wonder that it’s one of today’s most sought-after remodeling projects.

Current trends in bath design include spacious, glass-encased showers; clean-lined, functional cabinetry; light finishes and muted colors, among other things. But ultimately, style and amenities are a matter of personal preference.

Read on to discover how four west suburban homeowners worked with local designers and contractors to reconfigure and refresh their master baths.

Damage from a roof leak prompted Ron and Rosanna Grutzmacher to remodel the master bath in their Warrenville home, but they were happy to have an excuse to give the room a dramatic update.

“It was too narrow, the shower was in the wrong place, and there was wasted space when you first walked in the room,” recalls Rosanna. The master closet was also accessed via the bath, but it was “small, dark and not very functional,” Ron observes. They hoped to make both spaces more user friendly and visually appealing.

The couple worked with Brian Hogan, owner of Hogan Design & Construction in Geneva to reconfigure and revive the bath. They relocated several elements, bringing the toilet forward and creating a separate water closet in the wasted space near the entry, which freed up room for a larger shower beside the tub in the former toilet space. The opposite wall now features expanded cabinetry, including a glass-fronted linen cabinet across from the shower.

The new, larger shower has a glass door and a large glass panel on one side, which admits light and affords views of the outdoors from the adjacent window, making a dramatic difference in how it feels. “Walking into the old shower was like walking into a telephone booth and there was no light coming in,” recalls Ron. “Now it’s all lighter and brighter.”

Another design choice that helped visually enlarge the room, was the decision to lower the vaulted ceiling and replace it with a unique groin vault ceiling. “It’s very unusual to use in a house,” says Hogan, noting that the style is more commonly seen in churches. Though the ceiling is now lower, “the room feels bigger and warmer,” Rosanna says.

The design also included improvements to the closet, which now features custom cabinetry with a multitude of drawers and shelves that have allowed the couple to eliminate dressers in their master bedroom.

The couple now love the look and function of the room. “It’s amazing what a difference it makes to change around a few things,” says Rosanna, who appreciates now having everything she needs to prepare for the day in one connected space.

The master bath in this Downers Grove home hadn’t been changed since it was built in the late 1990s, and it was showing its age, leading the homeowner to seek help giving it an overhaul. “It fit our needs, but it needed modernization and more storage,” says the homeowner, who noted the large room also seemed a bit cramped. “There was a huge whirlpool tub with deck that took up a third of the entire space.”

With the help of Joseph Kiselyk of The Kitchen Master in Naperville, they developed a new plan for the space, which was fairly large, but included elements that made it feel small, including angled cabinets, arched soffits and decorative pillars at the entrance to the tub.

Taking out the soffits and swapping what the homeowner referred to as the “monster” tub for a freestanding resin tub flanked by glass-fronted storage cabinets instantly opened up the room and allowed more natural light to flood the space. Straightening out the cabinet configuration and moving the make-up vanity area to the opposite side of the room also made things feel more spacious.

Kiselyk made room for a larger shower by removing a linen closet and repositioning the water closet door. The shower area now includes multiple shower heads, porcelain marble tile and a low-maintenance glass door. The new cabinetry includes built-in trash and laundry hamper cabinets as well as wall tower cabinets and deep drawers. The homeowner reports that, while the new cabinets are slimmer, the storage is much more accessible and functional.

One of the homeowner’s favorite parts of the retooled room is the heated tile floor, which features large marble-look porcelain tiles surrounded by a black border. It not only warms up the room but also draws the eye to the tub area. “The floor is probably the most spectacular turnout of the entire project,” he says. “I never would have envisioned that a floor would be the first thing you notice about a room, but it’s fantastic.”

It’s been a year since the project was completed, and the homeowner says he and his wife continue to enjoy the finished space. “Everything got a modern, elegant look. It’s much more functional, fresh and updated. It really turned out nice and has exceeded my expectations.”

When Greg and Gina Johnson purchased their home in Hinsdale two years ago, they saw the 1950s-era ranch’s potential, though they knew it needed a complete overhaul, including the master bath. “It had old, dark cabinets and countertops and the layout was antiquated,” recalls Greg. “I wanted to accomplish a sense of calm and serenity,” says Gina, who had an improved built-in tub and fireplace on her wish list, as well as a larger shower and additional storage.

To accomplish their goals, the couple worked with designer Janice Teague from Drury Design, who opted to remove the vanity, closet and walls on the right side of the room as well as an arched opening over the tub. The back wall of the closet was pulled forward into the bathroom, creating a narrow shoe closet accessible from the bedroom, which still allowed for a wider shower.

The couple chose an undermount soaker tub rather than a freestanding tub for accessibility. You won’t find a large, clunky tub deck here, however — Teague designed a slender, curving surround that connects to a bench, which flows into the shower bench. All are covered with mini mosaic stone for a cohesive line. The wall across from the tub now features an elongated in-wall, remote control electric fireplace flanked by simple sconces, creating the relaxing ambience Gina wanted.

In addition to the fireplace, other luxurious details, including heated floors, a heated tub back and a towel warmer make this bath inviting even during the cold winter months. A digitally controlled shower system creates a custom shower experience and is one of Greg’s favorite elements in the room.

The bath now feels brighter and more spacious, with its shades of white and gray, including marble-look porcelain flooring and gray custom cabinetry. “I wanted all neutrals because I like to add color though artwork and accessories,” Gina explains.

While she is still choosing artwork for the room, the various tile patterns and shapely light fixtures, including a chandelier near the tub and pendants by the sinks, contribute an artistic touch.

All in all, the couple couldn’t be more pleased with how the room turned out and plan to enjoy it for years to come. “I’m never moving again,” says Gina.

Though the master bath in their Naperville townhome was perfectly adequate, Pete and Betsy Nassos had felt the room was dated and inefficient since they moved in five years ago. The goal was to transform the room into a spa-like sanctuary. “It needed painting and new fixtures, plus it had a small footprint and a big tub,” Betsy says. “Instead of just changing the cosmetic things, we decided to redo everything so we could really enjoy the space.”

Working with Patty Rosignal, owner of River Oak Cabinetry & Design in Plainfield, the couple started with a clean slate, gutting the room and taking out the large bathtub, which allowed for a roomier shower and a longer vanity with additional cabinets.

Including plenty of extra storage was important because the room does not include a linen closet. River Oak had also remodeled the couple’s kitchen, and they opted to use the same cabinetry in their bath, even including some typical kitchen elements like pull-outs, which work just as well for sheets and towels as they do for pots and pans. Improved lighting and adjustable mirrors also enhance the function of the space.

Among the most unique elements are the tile-lined niches in the wall directly across from the room’s entry. Rosignal, who added similar features in her own bath, found them to be a beautiful and functional alternative to hanging artwork on the wall. The glass tile in the Nassos’ bath matches that used for the border in the adjacent shower, and 4-inch depth of the niches is enough to accommodate a votive candle or vase of flowers. “It’s a beautiful focal point; your eyes are drawn to them right away,” Betsy says.

The bath was finished several months ago and Betsy couldn’t be happier. “Every time I walk in the room, I smile,” she says. “With her eye for detail and color, Patty really helped us achieve the calmness of a spa setting.”